The discovery of King Richard III under a car park in Leicester made news around the world.

King Richard III’s story has always had fact and fiction entwined within it. It is fact that he was killed at Bosworth Field on 22nd August 1485, that his body was taken to Leicester and that he was buried at Leicester’s Greyfriars on 25th August. It is also fact that a tomb was erected over his grave ten years after he was buried. The evidence for these is clear and undisputed. The Friary was one of many destroyed during the Dissolution of the Monasteries in the late 1530s. There are no records or indications that King Richard’s remains had been removed from Greyfriars.

In the early 17th century rumours began to circulate in Leicester that King Richard’s remains had been exhumed from the Friary and either thrown from Bow Bridge into the River Soar, or buried near the bridge, or thrown into the river and rescued from it and buried in a nearby cemetery. The onset of rumours coincided with the visit to Leicester of John Speede, a map maker, who reported that the tomb had been pulled down and defaced. Furthermore, Speede wrote that all that remained of King Richard’s grave was the stone chest that had held his body, which was being used as a drinking trough for horses at a common inn. It was subsequently discovered that Speede had visited the site of the Blackfriars NOT Greyfriars. As the years passed, the ‘bones in the river’ story gained prominence and changed from rumour to ‘fact’. King Richard’s biographers did not seem to question the story. So believed was the story that it also appeared in the exhumation order, written by the lead archaeologist in 2012, in an application to the Ministry of Justice to exhume remains found at the excavation of the Greyfriars, and which subsequently proved to be those of King Richard.

A few researchers disagreed with the story and believed that Richard III’s remains still lay within the area of Leicester where the extensive Greyfriars site had once existed. The first was Caroline Halstead in 1844 who thought the tomb may have been defaced and the remains disturbed but saw no reason that they had been deliberately removed. The 20th century led to a renewed interest in Richard III and his grave. In his book about Medieval Leicester (1920), Charles Billson stated that there was no reason to believe that Richard’s remains had been removed from Greyfriars and that they were under  the street of Grey Friars or its nearby buildings. In 1975, Ricardian Audrey Strange published an article in the Richard III Society’s Journal that dismissed Speede’s story and suggested that Richard’s remains remained in situ. She was the first to name the three central car parks near Leicester County Council’s offices as the likely location but nothing was done and the ‘bones in the river’ story continued apace.

In the 21st century two other researchers were looking at the question of where Richard was buried and whether there was any chance his remains could be found. They were Philippa Langley and the late Dr John Ashdown-Hill. Working independently they came to the same conclusion. The remains had not been thrown into the river but had remained in the original burial ground. After four years of research, Philippa reached the conclusion that the king’s grave must be situated in the northern end of the Social Services car park.

The 18th century Cramond Inn sits on the shore of the Firth of Forth in North West Edinburgh. It is the traditional meeting place of the Scottish Branch of the Richard III Society and was the surprising birthplace of the successful search for the lost grave of King Richard III. The search for the king’s grave began on 21st February 2009 at a Scottish Branch study day organised by Philippa Langley, the branch secretary. She had invited John Ashdown Hill to give a series of talks about his research into the history of the Greyfriars site and his genealogical work in tracing a modern day descendant of Richard III’s sister to discover the king’s mitochondrial DNA sequence. This meant that if King Richard could be found, he could be identified. Philippa had been following John’s work for some years whilst doing her own research and when they finally met in Edinburgh she put forward her hypothesis for the location of the grave which John agreed was a possibility. Then in the summer of 2011 and doing his own research into the layout of priory precincts, John now agreed with her conclusions – the choir of the Greyfriars Church in Leicester must be under the northern end of the Social Services car park.

Wendy Johnson was one of the members present. After lunch, she recalls that Philippa brought up the subject of Richard’s lost grave, and told the members about a proposal to excavate the Social Services car park made four years earlier to the archaeological TV show Time Team. John told us that he had indeed contacted them on Philippa’s instigation, but although interested in the story of the king’s grave, the car park was too large an area for their three day dig format. The late Dr Raymond Bord was another important contributor that day. Unusually he had been strangely silent at lunch until he quietly said to Philippa that he knew someone in Leicester who would be able to help her contact the Chief Executive Officer of the Council. This sparked some excitement; finally we had a name, a contact – somebody who might help take this idea forward.  Philippa recognised that the research was compelling, and in spite of the difficulties, she would now go ahead with a project to find the lost grave of King Richard. Wendy wondered whether this would be one of those game changing moments. Would we ever be able to convince Leicester City Council that this idea was viable? If we did, would we be able to uncover the King’s remains and provide an honourable reburial? And if so, would we be able to disprove the Tudor myths?

So at an ancient Edinburgh inn, Philippa began the Looking For Richard Project and set out on one of the most difficult historical tasks ever attempted. She had to persuade the authorities in Leicester to allow her to excavate one of their car parks (and a second privately-owned adjacent car park), raise the money and commission archaeologists to do the work. Dr Bord was as good as his word, Philippa made contact and permission for the dig and her Ground Penetrating Radar survey was granted in 2010. As the client, Philippa had received personal permission from the council to undertake both investigations. She and Scottish Branch members David and Wendy Johnson formed the original team as founder members, and were soon joined by John Ashdown Hill and author Annette Carson (when they returned to England in 2012 and 2011), and the Chairman of the Richard III Society, Phil Stone (in 2012).

The archaeological dig began on 25th August 2012, the 527th anniversary of the day King Richard had been placed in the grave. The Leicester archaeologists were pessimistic. The team leader stated that if King Richard was found and identified, he would eat his hat! Within a few hours, Philippa and her project team achieved their objective, finding the remains of King Richard within feet of the position she had identified. For Philippa it had been four years of research and a three and a half year battle to get the tarmac cut from her decision at the Cramond Inn on 21st February 2009. On Monday 4 February 2013 the remains found on the first day of the dig at in the northern end of the Social Services car park were identified as those of King Richard III. The news was released by the Leicester University academics at an international press conference that made headlines round the world. Miles away from where the events were being announced, the Scottish Branch celebrated the success of Philippa and the team, knowing that they had not only supported a far-reaching project but that our secretary had driven it through and achieved something that may never be matched.

On 22nd March 2013 at the Scottish Branch AGM, members decided to erect a Plaque at the Cramond Inn to commemorate the day the search for King Richard began. Philippa Langley put her persuasive talents into action again to get permission for the Plaque to be erected and Sandra Pendlington designed and commissioned the plaque itself. Made by the Liverpool company, Photocast Limited, the silver text is raised to give an embossed effect and the blue background has a textured look with a simple border of alternate blue and silver squares. The plaque has a white boar motif and two white roses to disguise the fittings.

The Plaque was unveiled on 12th April 2014 by Philippa. The Plaque is accompanied by a portrait of Richard III painted by artist Cynthia Waterman and a sign explaining the significance of the Inn in the story of the search for King Richard III. 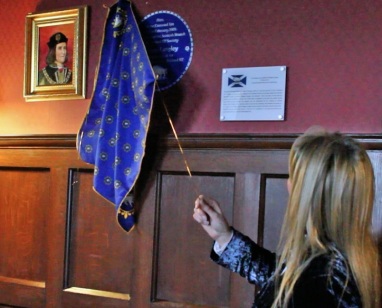